Daylight Saving Time(DST) : DST is the practice of advancing clocks during part of the year, typically by one hour around spring and summer, so that daylight ends at a later time of the day. 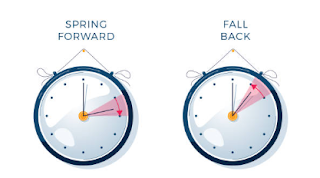 How SAP systems are affected due to DST :

Many kinds of software that deal with local time, such as the SAP system, have serious problems in this hour, because operations which use local times can fail if time does not increase continuously, and points in time can "happen" twice.

In many northern hemisphere countries (i.e., Europe: European Union, Russia; North America: USA, Canada, Mexico) At the end of daylight-saving period, one hour occurs twice as the clocks are put back an hour. In Europe, for example, this hour is between 2:00 a.m. and 3:00 a.m., whereas in the USA it occurs between 1:00 a.m. and 2:00 a.m.

How to handle Double hour issue in SAP:

3. Zero downtime method: Slow down the time in the SAP System.

The first method is simple and straight forward. Simply shutdown the SAP system, for the entire duration of the double hour, and bring it up only after the double hour has passed. Thus, the SAP Kernel software does not have to deal with any possible mismatch of standard time and local time.

3.     After the daylight-saving time change, bring up the SAP when clock reaches the actual time again.

The second method is almost the same as the first one. However, you should adopt this only in cases where all of your SAP systems have identical local time settings.  In that case, you can reduce the downtime close to 1 hour instead of 2 hours. In practical terms, here is what you can do:

If you are using kernel 6.40 or higher, you need to set the following profile parameter according to Note 950114: zdate/DSTswitch_contloctime = off

You should use transaction RZ11 to dynamically switch the profile parameter in the active system before the "double hour".

1.      Shutdown SAP a little before 2 am(official time) before the clock is changed back to 2am(DST switch)

Drawback : Only drawback is 1 Hour downtime; Rather than option 1 which has 2 hour downtime.

In this case, you slow down the time by half by setting parameter zdate/DSTswitch_contloctime = on, during the double hour, so that the 2 hour period is treated as one hour. You can make your SAP system see a continuous time with a deviation of 30 minutes.

Note: You should check the pre-requisites in the notes mentioned at end of this blog, before executing this method to avoid any issues.

1.      At 2am, i.e., one hour before the change of time, your SAP system clock starts running slowly at half the normal speed

2.      For the next two hours, the SAP system will run slow at half speed (No impact due to slow time in SAP, this is just a perception not real.)

3.      Hence, the double hour is observed as one continuous hour by SAP.

4.      After two hours duration, the official clock time and SAP time will match. Hence, the system will continue normally from then onwards (with both official and SAP clocks being in sync).