How to check if it is working or not ?

In case of linux , you can simply ps -ef | grep sapstartsrv

In case of windows, you need to check the task running similarly

If it is not running you can get a error FAIL : NIECONN_REFUSED

If sapstartsrv is not starting :-

1. Check sapstartsrv executable size in file is not 0

Start the sap startsrv if not running :

if above does not work

if any of files are not created for whatever reason sapstarting would be failed Error would be something like "Unable to open trace file sapstartsrv.log"

1. Check the profile parmaters are maintained for the SAP system in profile :

2. Check the ownership and permissions of the file :

3. if /usr/sap/<SID> is a mounted directory , make sure it is NOT a read only file system.

4. /tmp is accessible by everyone

/tmp directory is accesible by everyone : ls -lad /tmp

user and group should be root in this case

Changing the /tmp file ownership (it should be 777)

(O means for all other user, in shor the program when executed by any other user then it will be executed as root but other users still have some limitations which are mentioned below A sticky bit is a permission bit that is set on a directory that allows only the owner of the file within that directory, the owner of the directory or the root user to delete or rename the file. No other user has the needed privileges to delete the file created by some other user.This is a security measure to avoid deletion of critical folders and their content (sub-directories and files though other users have full permissions.

Why do we use t ? The /tmp directory can be used by different Linux users to create temporary files. Now, what if an user deletes/rename a file created by some other user in this directory? Well, to avoid these kind of issues, the concept of sticky bit is used. So for that a 777 is given but preserving the sticky bit is not a bad idea.)

Scenario 1 : sapcontrol to perform operation on  a remote server

NIPING is a tool delivered by SAP in the SAP executable directory (..\usr\sap\<SID>\D<instance enumeration>\exe. The tool is used by SAP support to check on the network connectivity and more important latency and throughput on the network. link for more info (https://techcommunity.microsoft.com/t5/running-sap-applications-on-the/niping-8211-a-useful-tool-from-sap/ba-p/367109)

but After using this if have output as ready for client

this means that your configuration was not configured properly Incorrect Configuration

After this involve your linux team and ask them to set "net.ipv4.ip_nonlocal_bind" to 0 at the "/etc/sysctl.conf" (or removing this setting from file as default value is 0)

To avoid the need of server restart , sysctl net.ipv4.ip_nonlocal_bind=0 as root dynamically restart

if you use this command again niping -s -H 1.1.1 (use any invalid ip addr) it should work fine if you get a ERROR SiBind Failed , that means the configuration was done properly

Verify the active value for parameter "DefaultTaskMax" with the command systemctl show -p DefaultTaskMax if the reported value is less than 65536 Edit the file "/etc/systemd/system.conf" and change the value of DefaultTaskMax to 65536

It is required to reboot the server 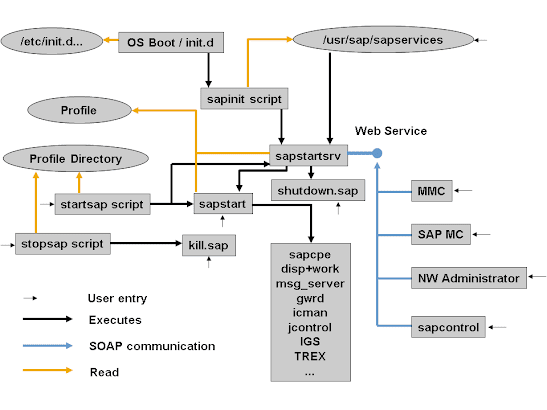 SAPSTARTSRV (through SAPCONTROL interface) offers a variety of web methods that can be used to monitor/manage the instances of the system. They are specially useful for handling startup error scenarios. The “must-know” ones are listed below and also the general pattern for executing them

Web methods that are usually used :

GetProcessList : the component list currently in place on any of the instances seen in the first command.

GetVersionInfo : Great for kernel consistency checks, this output will return the current kernel release + patch for each and every of its components within the instance informed as argument in the command line.