Let’s talk about the entire concepts that are related to memory when we talk about SAP Application.

Local process memory, the operating system keeps the two allocation steps transparent. The operating system does the other tasks, such as reserving physical memory, loading and unloading virtual memory into and out of the main memory.

If several processes are to access the same memory area, the two allocation steps are not transparent.

One object is created that represents the physical memory and can be used by various processes. The processes can map the object fully or partially into the address space. The way this is done varies from platform to platform. Memory mapped files, unnamed mapped files, and shared memory are used.

SAP extended memory is the core of the SAP memory management system. Each SAP work process has a part reserved in its virtual address space for extended memory. You can set the size of extended memory using the profile parameter em/initial_size_MB: Extended Memory Pool Size.

Mapping can be done from any extended memory from the common resource to any work process.

[If you have programming understanding , It is majorly used when pointers are involved in ABAP Program]

Allocation of memory for the current internal session by transferring pages out of memory, similarly to operating system paging. SAP Paging enables the roll area to be extended at ABAP runtime when a large dataset, internal tables is handled.

Virtual memory is fully independent of the physical main memory.

All operating systems which we use for SAP Applications support virtual memory technology.

About Text segment (a.k.a code segment) and data segment.

Text segment is where you store the program.

Data segment is where you save the data.

About Heap and Stack Memory Allocation :

The heap increases in size from the bottom , The memory is allocated during the execution of instructions written by programmers.

The stack increases from the top and  allocation happens on contiguous blocks of memory, which enables the entire virtual address space to be used.

Understand it this way ,

With 32-bit systems, 4 GB of memory is theoretically available. Depending on the operating system, there is approximately 2 GB of virtual address space available to a process.

When the context of a work process changes (when the previous work process is completed and new one task take up to that work process ), the data is copied from the roll area to a common resource known as the roll file. To prevent repeated copying, another roll buffer is located in between, which is part of the shared memory.

We have two segments in roll area,

ztta/roll_first : assigned to the work process first as memory

ztta/roll_area : if the memory that was assigned earlier is used and the work process needs more memory then this memory is assigned.

The amount of memory is determined by the difference between the ztta/roll_area and ztta/roll_first parameters.

Parameter which determines this is rdisp/PG_MAXFS

What is stored in Paging Area here is an example :

We have a issue mentioned related to SAP Paging which clears more about Paging : Read Here

Up to this time point no other user context can be mapped to the work process.

Once the user context is terminated (work process is released, restart : restart occurs when the work process use more local memory than is defined in the parameter abap/heaplimit ) , local memory is returned.

In the parameter settings, ensure that not too many dialog work processes are simultaneously in the PRIV mode, since this lowers system performance.

The other work process types , the non dialog work process  (background, update, enqueue and spool work processes) are assigned heap memory after the roll area is used up. Allocating Extended Memory is not useful since no context change occurs for these processes.

Since we are on this topic , lets talk about Automatic Termination of PRIV mode Processes :

The SAP system offers a way out that lets you terminate non-active dialog processes in the PRIV mode.

We set rdisp/wppriv_max_no , say n . What happens after this is if you have more than this number of work process running in private mode. Work processes are active and the time span set in parameter rdisp/max_priv_time has elapsed, the transaction for that PRIV process, which has spent the longest possible time in PRIV mode, is reset

rdisp/wppriv_max_no. (Number of dialog work processes - 5 or 1 which ever has the grater value among this two )

If we set rdisp/wpriv_max_no = 5 and rdisp/max_priv_time = 600 second. Then, the SAP system checks periodically if more than 5 dialog work processes are in PRIV mode after 600 seconds (10 minutes). If this is the case, the transaction is reset that has been in PRIV mode for the longest time 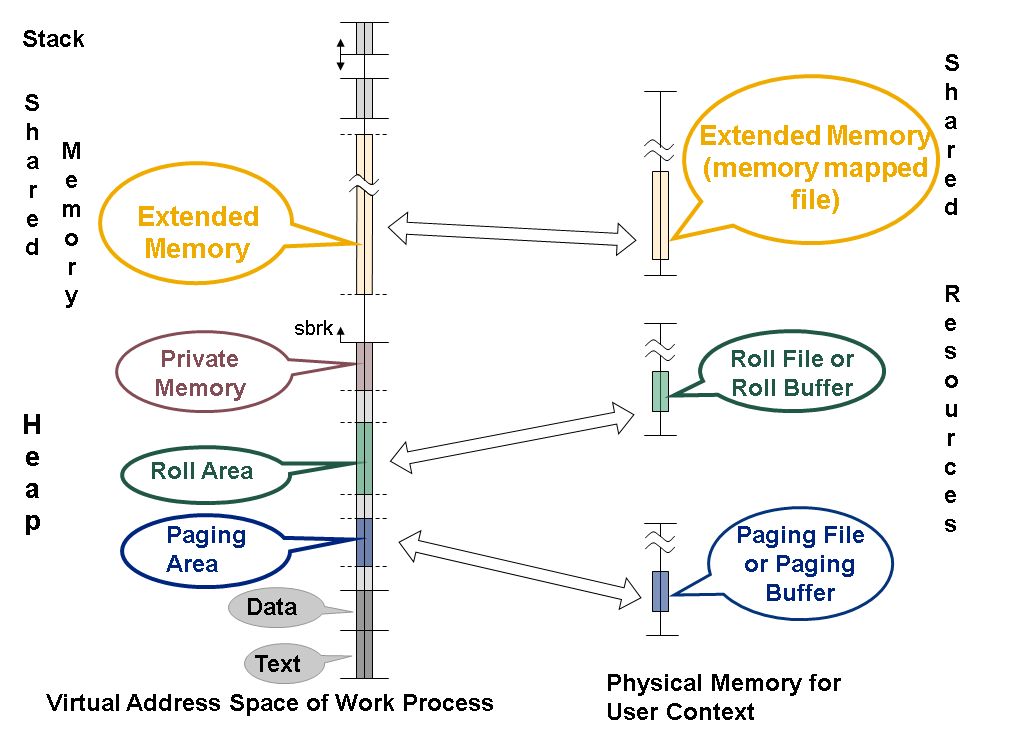 What is Memory Allocation ?

An application runs in an SAP work process where an ABAP program is normally executed. The process requires memory to do this, which is allocated to the process by the memory management system.

This would be the right time for you to understand few more terminologies:-

Temporary memory area that contains information about users which is used throughout the program processing. User information that is stored [Current Settings of the user ,  User Authorizations , Names of program that user are currently using] , Once they log off this memory is released.

Memory area which is allocated by work processes for the program instance.

Each time a user starts a program, a roll area is created for that instance of the program.Program Information contained [ Dynamic Memory Allocations, Variable Value and Current pointer of the program ]

The memory in the roll area becomes free when the program ends its execution.

If two users run the same program at the same time then two roll areas will be created one for each user.

The SAP Roll Area is used for the initial memory assigned to a user context, and (if available) for additional memory if the expanded memory is full.

Roll-in: cross-user data is rolled in from the common resource in the work process (and is processed there).

Roll-out: User-specific data is rolled out from the work process in the common resource (after the dialog step has ended) 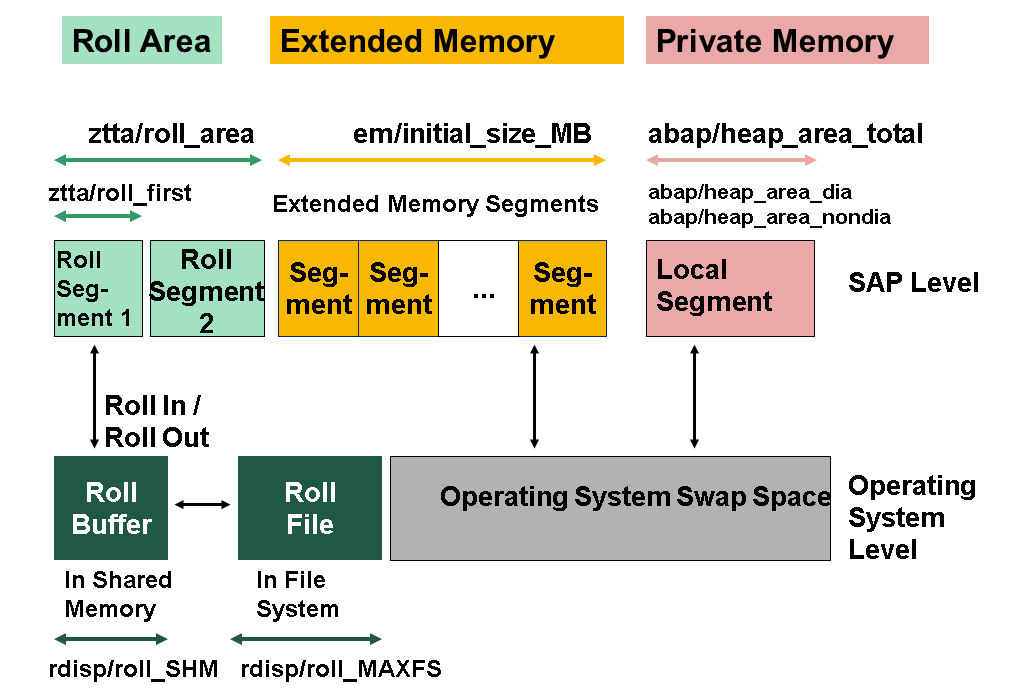 In case of Dialog process :- 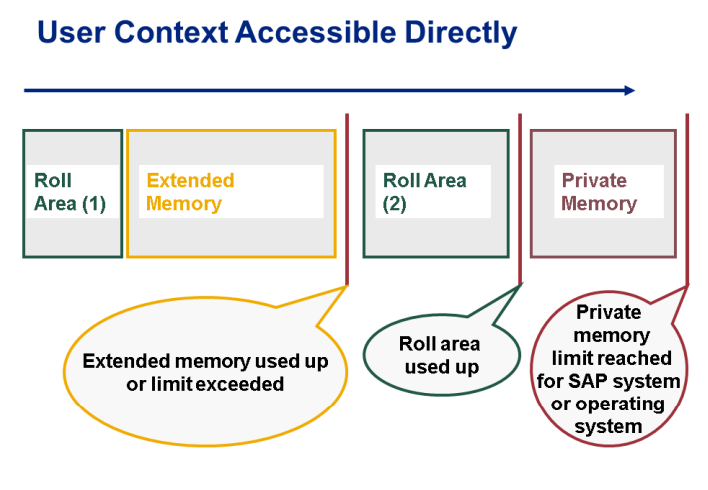 In case of Non Dialog Process :- 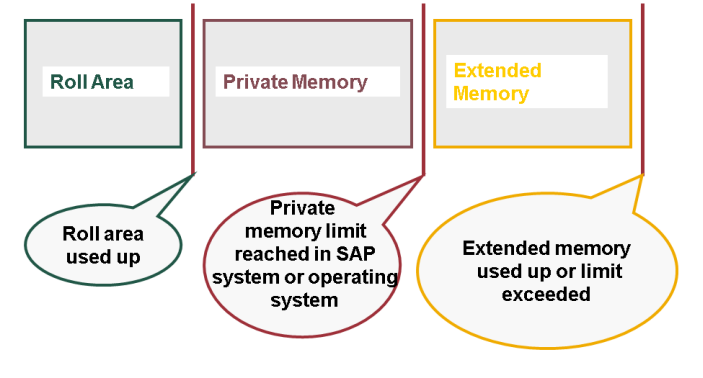 Note :-  Once work process comes in PRIV mode it  cannot be terminated by the parameter “rdisp/max_wprun_time”, it remains connected to the user until the user ends the transactions or it is timed out by the system due to the memory or explicitly logged out using SM04/DPMON.