The SAP HANA database lifecycle manager (HDBLCM) Web user interface is hosted by the SAP Host Agent, which is installed on the SAP HANA host. When installing or updating the SAP HANA system, as part of the SAP

HANA resident HDBLCM configuration, the SAP HANA system deploys its artifacts on the SAP Host Agent, thus enabling the Web user interface.All Web user interface actions are always performed in the context of an already installed and registered SAP HANA system. In order to access the SAP HANA database lifecycle manager Web user interface you need to log on as the system administrator user <sid>adm.The communication between the Web browser and the SAP Host Agent is always done over HTTPS, which requires that the SAP Host Agent has a secure sockets layer (SSL) certificate (PSE) in its security directory.The backend is provided by the special executable hdblcmweb, which is started automatically by the SAP Host Agent as soon as an action is triggered from the Web user interface and terminates after the action completesNow we can understand that whenever we access hdblcmweb we indirectly use hostagent.We have a known error which is discussed in this note2550407 - hdblcm update_host failed with errorsSymptomTry to use SAP HANA database lifecycle manager (hdblcm) Web UI from the SAP HANA Studio, the Web UI does not open and you get error: Error occurred while trying to start SAP HANA lifecycle managerTry to open the Web UI via standalone browser via http at URL http://<hostname>:1128/lmsl/HDBLCM/<SID>/index.html, get a page not found message (404 Not Found)Followed the troubleshooting steps mentioned in SAP note 2078425 - Troubleshooting note for SAP HANA platform lifecycle management tool hdblcm, after running command:<sapmnt>/<SID>/hdblcm/hdblcm --action=update_host --components_registration=nonegot the following error in the log:WRN : Deployment of SAP Host Agent configurations failed on host 'xxxxxxxxxx': Detection failed, SOAP-ENV:ServerCauseEnable the traces of the SAP Host Agent, edit the host profile /usr/sap/hostctrl/exe/host_profile and add the following lines:hostexec/trace = 3service/trace = 3Restart the SAP Host Agent with the following command: /usr/sap/hostctrl/exe/saphostexec -restartRun the hdblcm --action=update_host --components_registration=nonecommand again to reproduce the error. Check the /usr/sap/hostctrl/work/sapstartsrv.log, you may find the following entries: *** ERROR => Unable to open /usr/sap/hostctrl/exe/descriptors.d (13: Permission denied) *** ERROR => Could not open directory '/usr/sap/hostctrl/exe/operations.d' (13: Permission denied) ***ERROR => Unable to deploy: Unable to access /usr/sap/hostctrl/exe/adapters.d: Permission deniedThe filesystem owner settings on the mentioned directories are wrong.Both directories should belong to root:sapsys.If they belong to root:root, it will not be possible to deploy operations and descriptors properly. 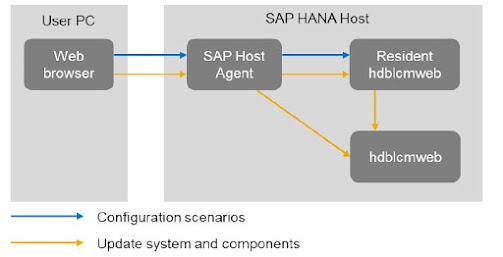 One platform LCM task, which is worth special attention is the update of the SAP HANA system and components. The SAP HANA system updates are always performed by the installation kit SAP HANA database lifecycle manager in the graphical user and command-line interfaces, (and not the SAP HANA resident HDBLCM). This is because the SAP HANA database lifecycle manager, in the graphical user and command-line interfaces, is not forward compatible. Meaning that only the new version of the tool knows how to update an older system.
On the other hand, all scenarios in the Web user interface are handled by the SAP HANA resident HDBLCM, which is part of the system. For this reason, as a first step before even starting the update process, you are required to enter a location of an SAP HANA database installation kit. After detecting the kit, the update Web user interface is loaded from the installation kit and the installation kit SAP HANA database lifecycle manager starts serving as backend until the update process finishes. It is as if you start the SAP HANA database lifecycle manager directly from the installation kit in graphical user or command-line interface.
Resolution
logon as root user, change the ownership of the above mentioned two directories:
chown root:sapsys /usr/sap/hostctrl/exe/operations.d
chown root:sapsys /usr/sap/hostctrl/exe/descriptors.d
chown root:sapsys /usr/sap/hostctrl/exe/adapters.d
Run the following command again to redeploy SAP host agent configuration:
<sapmnt>/<SID>/hdblcm/hdblcm --action=update_host --components_registration=none
Prerequisite for using hdblcm webui
● The SAP HANA studio revision is 120 or higher.
●For Linux:
The system property org.eclipse.swt.browser.XULRunnerPath should be set in hdbstudio.ini to point to the path of XULRunner, for example:-Dorg.eclipse.swt.browser.XULRunnerPath=<path to xulrunner>.
This hdbstudio.ini file is located in the same folder as the executable that is used to start the SAP HANA studio. For Linux, the default location is hana/shared/<SID>/hdbstudio.
The communication port 1129 is open.
Port 1129 is required for the SSL communication with the SAP Host Agent in a standalone browser via HTTPS.
SUSE Linux - Mozilla Firefox with XULRunner 10.0.4 ESR
Newer version of web browser is available
Architecture Database hana hostagent implementation